Once you have purchased a replacement Subaru turbo charger from us you need to make sure you know what to do before you fit it to your car, the following procedure is the minimum procedure that must be followed to prevent voiding your warranty.

How to fit a replacement Subaru turbo charger:

Please note; collapsed bearings, broken turbo charger shafts and spun turbine retaining nuts are not covered by our warranty as they are a direct result of lubrication problems or incorrect installation of the replacement turbo charger.

If you are in any doubt about how to install the turbo charger you have purchased from us please let us know and we can put you on to a reputable workshop in your area, Ph 0800 634-0065

Any questions about fitting Subaru turbos?

We sell a lot of turbos every year to customers throughout New Zealand, so please phone Strong for Subaru 0800 634-0054 if you have any questions about this procedure before you proceed: you can find our business hours here.

We’ll be happy to answer your questions or talk you through the process of fitting one of our replacement Subaru turbo chargers.

We stock a huge range of used tested and new Subaru Turbo chargers for all models from 1989 right through to 2015! 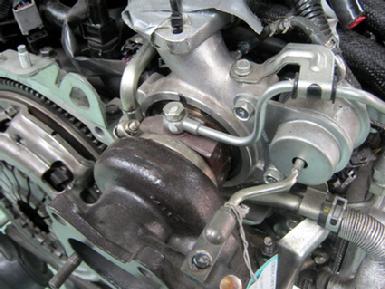 One of our turbos on a Version-10 Impreza engine

Most replacement turbo’s fail withing 1~500km of fitment due to incorrect or unprofessional installation and it is critically important to follow all manufacturers installation procedures as well as any extra service bulletins that the manufacturer has issued since the original instructions were printed. New turbo chargers do NOT fail if fitted correctly.

What are the common signs that the replacement turbo has not been fitted properly.

The nut at the end of the replacement turbo comes off!

This happens for a number of reasons

The main bearing has collapsed or the shaft has snapped.

The turbines are all smashed or bent.

If you have done all the above then the replacement turbo charger should last you many 1000’s of km’s, however if not then expect turbo failure at any moment.

This advise is given free of charge, we accept no liability for errors or damaged caused by following this advise and it is up to you to make sure that you are confident that the advise is correct for your application.